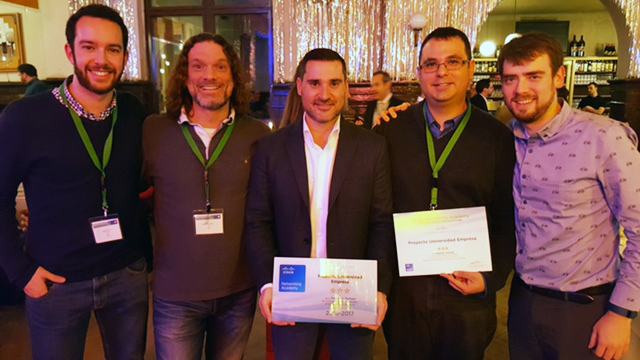 PUE was invited to the Cisco Networking Academy Partner Summit 2016, the annual partner summit held in Berlin from November 15th to 18th, as the only Premier + Partner in Spain of the prestigious Cisco educational program.

This has been awarded, for the second consecutive year, thanks to the intense work of PUE in Spain regarding the promotion and support aswell as the achievement of the program objectives. Over the past year, PUE has carried out educational work at more than 300 Cisco Academy centers in which a total of 13,406 students have been trained.

The Cisco Networking Academy Partner Summit Berlin 2016 introduced the new features of the program: new courses in IoT, CCNA and the new Spanish version of Linux Essentials, among others. In addition, activities of interest were developed in order to exchange knowledge, ideas and experiences related to the academic activity of the different partners of the program.

PUE had the honor of participating actively with several interventions. Our technical manager of the NetAcad PUE program, Ramon de la Rosa, participated in the Best Practices block which was presented along with Albert Forn, Director of the mSchools project of the GSMA entity, M-Schools, a successful partnership for IoE implementation in middle school system. The presentation expound the mSchools initiative and, within it, the second edition of mSchools TechCamp celebrated in July of this year as a success case: technological summer schools where students, in addition to having fun, benefited from quality training with the learning by doing methodology.

Our instructors conducted various workshops based on the IoT curriculum of the Cisco Networking Academy where students developed prototypes which integrated different solutions in home automation. An experience for the participants in an initiative resulting from the collaboration between PUE and the GSMA in orther to develop talent among young people through training in digital skills.

Amador Gabaldón and Ramon de la Rosa, our NetAcad team, also participated as facilitators in one of the most innovative activities of this new edition of the Cisco Partner Summit: IoT Hackathon and Creathon.

PUE is both ASC (Academy Support Center) and ITC (Instructor Training Center) of the NetAcad program with which has been associated for more than 15 years. Both figures credit PUE as an authorized institution to support the Cisco Academies network and train its instructors.

For the second consecutive year, PUE has collaborated in the mSchools TechCamp

April 17th in Madrid: 5th Edition of the reference event for the ICT educational community

For the second consecutive year, PUE has collaborated in the mSchools TechCamp