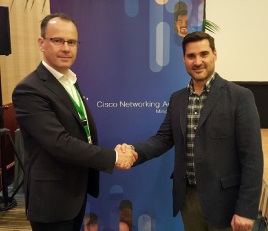 This new award, which adds to the received award in 2001 as Best Regional Academy, recognizes the intense work of PUE in Spain in its contribution to the promotion, support and overcoming of the program objectives. Currently, PUE carries out an educational work in more than 300 Cisco Academy centers that trains nowadays a total of 14,000 students nationwide.

The EMEAR Partner Summit gather in its annual summit the program partners for the EMEAR (Europe, Middle East, Africa & Russia) region with the aim of, in addition to thank the work done of all them, promote the continued growth of the NetAcad program through the transferred know-how and the experiences of all the protagonists in this new edition in Rome.

The various presentations, conferences and workshops presented the latest news related to the program, as well as the new curriculums of LPIC and IoE (Internet of Everything), with different practical activities where attendees could participate actively.

One of the workshops where our technical team, formed by Amador Gabaldón and Ramon de la Rosa were participating, consisted of putting into practice one of these new curriculums with the IoE workshop about the connectivity of devices in the cloud: “Enabling a baseline to connect the unconnected”.

Linked to the Cisco Networking Academy program for more than 15 years, PUE has participated in the event in its capacity as ASC (Academy Support Center) and ITC (Instructor Training Center) of the NetAcad program. Both figures recognize it as an authorized institution to give support the Cisco Academies network that participates in the program and to train their instructors.

Objective accomplished in the annual edition of PUE DAY!